The report from each till at the end of the shift

First and foremost among the till reports is the shift report. This is the information generated by your z-read at the end of each shift. Each shift report is specific to a till and contains various tabs with different information. At the top of the report you can see details of which till it relates to, which shift date and number, who performed the z-read and when.

The first tab shown is the basic sales breakdown and z-read summary. 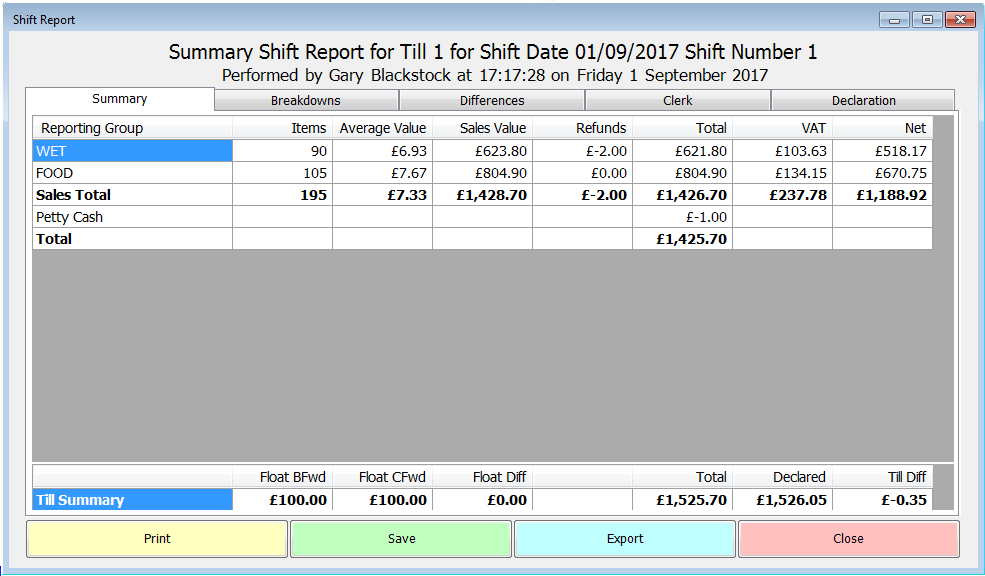 The reporting groups on the left should represent every item sold. Occasionally there will be a line for ‘Unallocated Items’ if items have been added to the till without being allocated to a reporting group. For each group there are various details about volume and value of sales, refunds and a VAT breakdown. Underneath the sales any deductions from the overall total in the form of Petty Cash are deducted to leave an overall total. At the bottom of the form there are details about the Z-Read such as float brought and carried forward, total expected, total declared and the overall difference.

The next tab, Breakdowns, has 3 separate sections. The first of these is the Stock Breakdown. 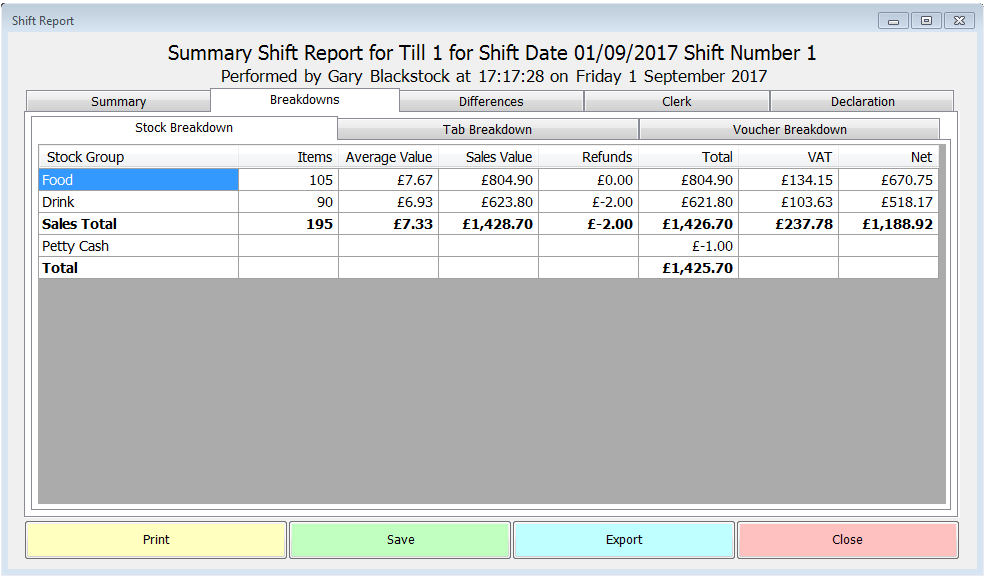 Here you can see a breakdown of sales similar to the summary tab but by stock family rather than reporting group.

Next is the Tab Breakdown. 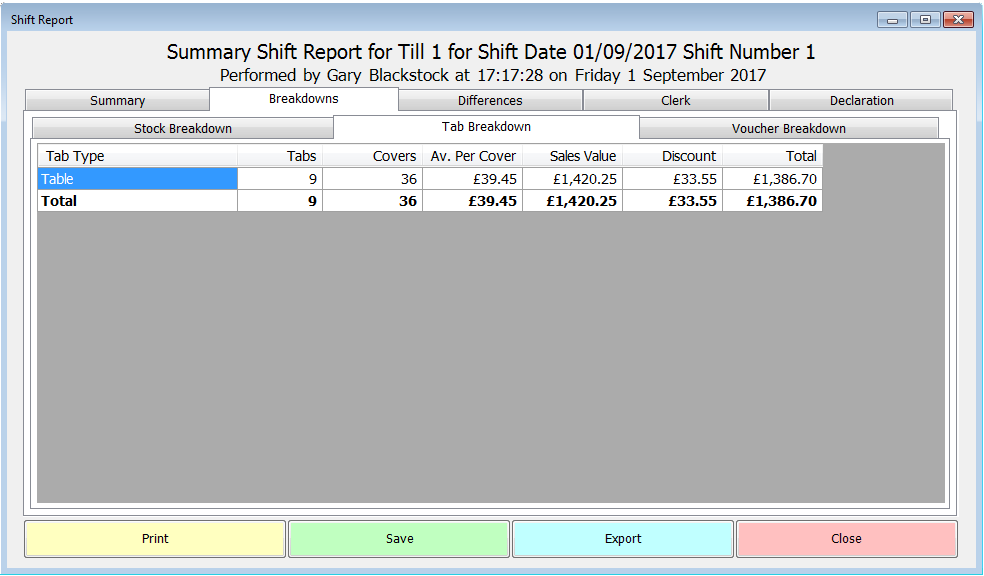 This shows the tabs cleared in the shift by type, and details the total covers, average spend per cover and any discounts.

The third breakdown is the voucher breakdown. This shows how many items have been discounted by any voucher promotions used in the shift and the average and total amounts of discount. 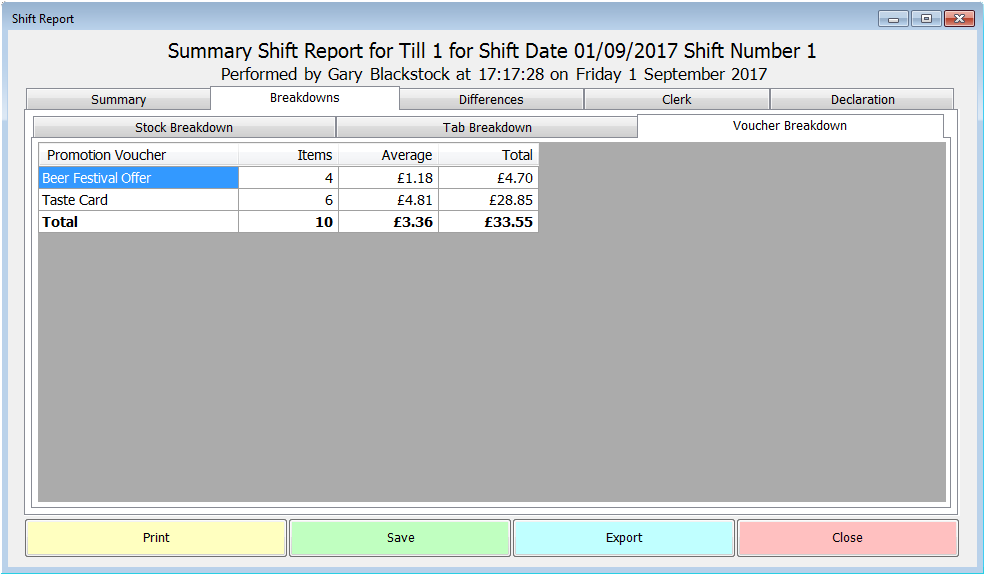 The third main tab is the differences tab. This lists all Refunds, Petty Cash entries and Till Differences recorded in the shift, together with their descriptions and whether they were recorded before or during the z read. 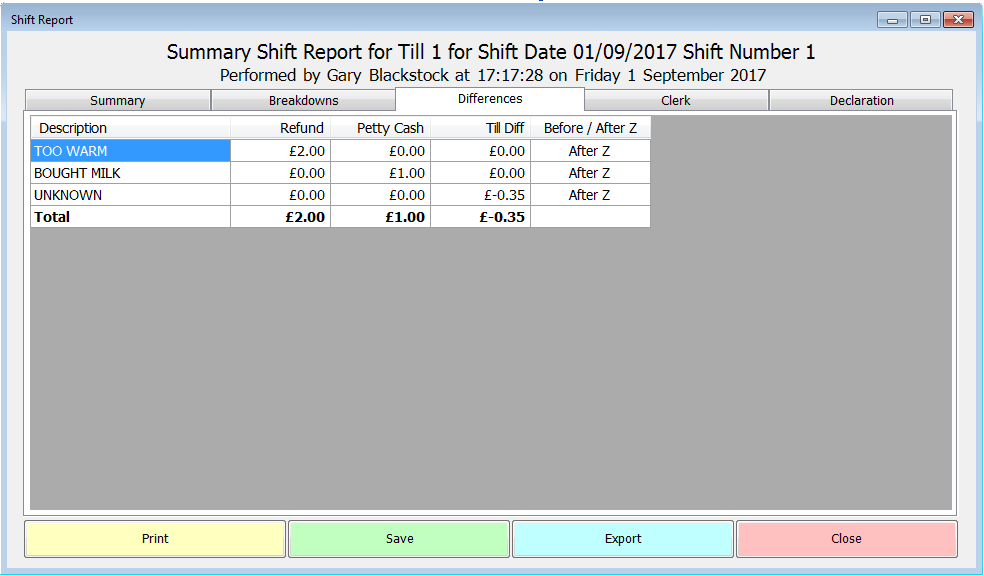 Next comes probably the most detailed tab, the clerk summary. This lists every member of staff who used the till during the shift in question and shows all aspects of their activity in the shift. As well as the number of items added and paid for there are figures relating to voids, no-sales and other activity such as cash-backs issued and tips received. The Average Sale Value column is a good indicator of relative productivity. A lower value here combined with higher than average numbers of voids and/or no-sales is used by some customers as an indication of fraudulent behaviour. 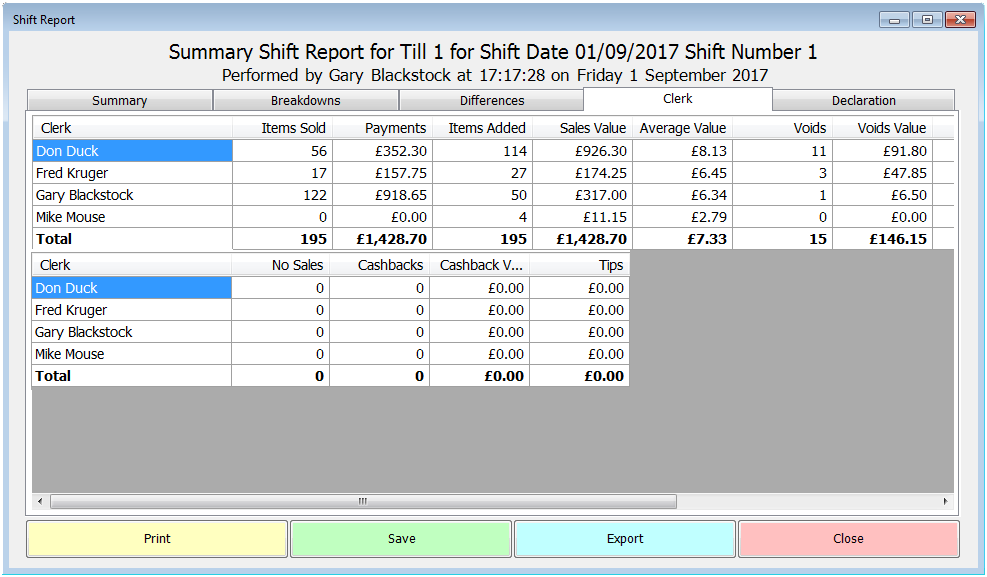 (image edited to show all columns)

Finally there’s the declaration tab. This shows exactly what was declared as being in the cash drawer at the time of counting, with separate sub-totals for cash, cards and any other payment types. You can also see on this tab the date and time of the first and last payments for the shift in question. Shortfalls can sometimes be explained by payments taken on the previous day which would be highlighted here.